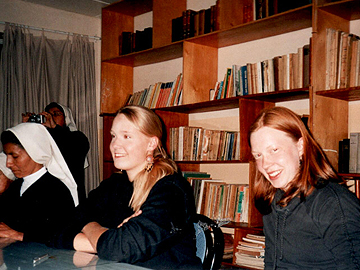 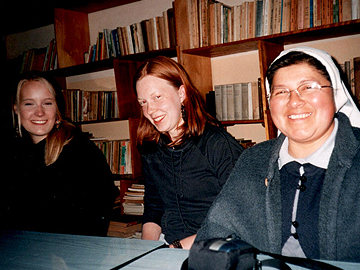 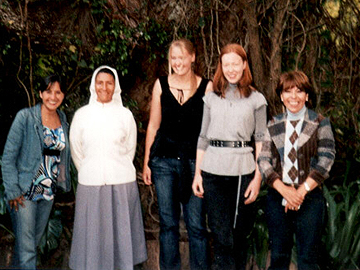 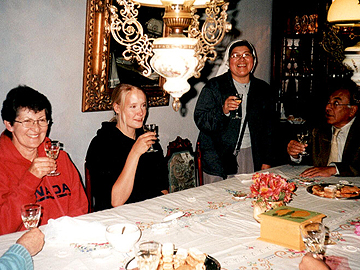 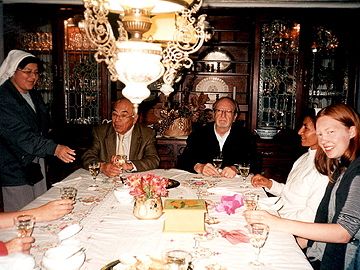 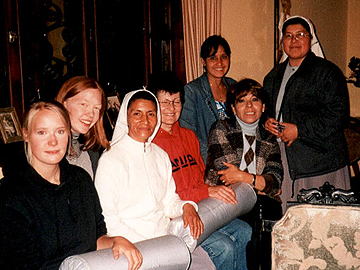 Alix and myself, Ricarda, spent 4 weeks working in the "Hogar de la Madre y el Niño" in Cuenca. We are both 18 years old, just finished school and decided to do something "useful" over the summer. A couple of weeks later we arrived in Cuenca, where we were picked up by Narcisa and Madre Rita, two of the women organising the place and welcomed very warmly.

My first impression was that the house is rather big and in some places a bit empty but in general, it is kept very tidy and they made a good effort to bring some colour in with colourful posters and handicrafts. Some parts of the house are still being renovated. In the dining room, for example, they are building shelves. They are planning to buy some fridges so that they can store fruit and vegetable donations from the market. Right now they tend to go bad because they cannot possibly eat 20 kg of apples before they get mouldy.

On the first day we attended a meeting between Narcisa, the social worker, Madre Rita, the nun organising the place, Jenny, the psychologist and Carmen, the project manager. They talked about strategy and what they are planning to do next.

The next day, our real work began. The house has received many donations of clothes from local people. It is far more than they could ever wear and a lot of it is not their sizes anyway. They have been collecting the clothes in one room and when we arrived, the place was a mess. Our task over the next few weeks included sorting through the clothes, throwing away the ones that could not be sold and then wash and iron the rest. We had a lot of fun with the clothes, some of it looked like people had just donated the wardrobe of their great-aunt but a lot of it was not bad quality. Our first rather pessimistic opinion turned more positive as we went along. Because Alix unfortunately fell sick, I had to make the first attempts at selling alone.

It had been suggested that we would sell clothes after church on Sunday, just to get started and see how people react. I was surprised but we sold a lot that first day. People turned out to be especially interested in the home-made pasta from the small pasta factory in the house. Helping in this pasta factory was another one of our tasks. The pasta is produced and then laid out to dry for a few days. We helped packing it into the plastic bags for selling.

The third business they are building up right now is a tailoring for costumes (which they will later rent out), mainly traditional and angels costumes for children. We were told that every Christmas, Cuenca sees a huge parade of children in costumes. We helped with making lots of little golden angels wings to go with the white, pink or brown gowns. They also started making aprons and are planning on making pillows from left over foam and upholstery fabric samples. They are very good at recycling and use the materials they can get very efficiently.

One highlight of the day for me was lunch because we always had lunch together. We were a bit unlucky with our timing because at the time when we were there, many of the mothers and their children had just moved out or where on holiday but the ones we met were very nice. A bit shy maybe at first but I thoroughly enjoyed the time in the "Hogar de la Madre y el Niño".

We met a lot of people who are very dedicated to their work and I think the help is really needed. I was under the impression that many of the girls have absolutely no other place to go. We only met the younger mothers, 13, 14 years old. Art from the obvious economic problem, they would not be able to provide for their children because they need help themselves so much. They are still children, after all, and that became very obvious to me during my stay there. However, I think that most of them, with all the help they get there, will be able to live a good life.

Furthermore, it gives the children a chance to grow up in a happy and safe environment. Unfortunately, that cannot be said about all the mothers. I have met girls that just were not careful enough but also a lot of girls that have been raped, some from a very early age on. Both types need a different sort of help but both need help nevertheless, especially when they are young.